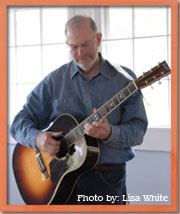 Jay began playing guitar at age 9, and has been at it ever since. He studied with Frank D’Amato, a legendary guitar teacher in New Haven, whom he counts as one of his most outstanding teachers ever, in any subject. In high school, Jay played jazz at the Exit coffeehouse (where he was introduced to folk music, and was Jazz Director for awhile) and sat in at the Cotton Club, New Haven’s spot on the organ jazz circuit. At Goddard College, a musical high point was jamming with other student musicians and members of King Crimson. Jay taught himself to play classical guitar after coming to Chicago for graduate school in psychology. 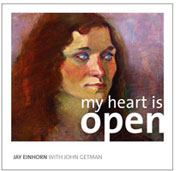 Jay began to write songs in the 1980s, encouraged by his wife Cynthia Standish. He formed a group, This World, in the mid-1990s, to perform his songs (the Illinois Entertainer, reviewing a demo cassette, said, “Just what a singer-songwriter oughta be”). Jay then played with jazz keyboardist John Getman. A practice recording in John’s living room, with John’s friend Cliff Fredericksen on bass, became Jay’s first CD, “My Heart Is Open” (2003), after John’s tragic death. The performance is rough and production almost non-existent. Noteworthy tracks include “Beck and Call” and “Lay My Burden Down.” Cover art is a painting, by artist Marilyn Johnson, of Cynthia when she was a student in Kalamazoo. 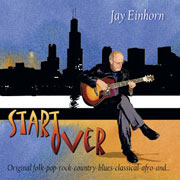 “Start Over,” Jay’s first CD recorded in studio, followed in 2007. Jay played four guitars on it, usually two per song, with a lead vocal and perhaps a harmony track. Son Elia (leader of Scotland Yard Gospel Choir, contributed harmonies on a couple of tracks, including “Good Morning Dad,” which Jay wrote for his father after his death, and which also features Ellen O'Hayer. Jay learned a lot about recording and producing on “Start Over.” Reviewer Brian Murphy, writing in the Evanston RoundTable, wrote:

“Jay Einhorn describes his album, “Start Over,” as a “folk-pop-rock-country-blues-classical-afro-fusion,” but I think his music can be best described as that of a man free to explore his thoughts through words and his acoustic guitar. Einhorn’s introspective, minimalist approach, one of gentle guitar noodling and Burl-Ives-reminiscent intonation, creates a mellow atmosphere, where crises of the past have given way to a wistful yet hardened view. Einhorn finds inspiration in the poems of Emily Dickinson in “Market Price,” while life experience serves as a muse for “Enough to Drink” and “Start Over.” The unabashed honesty and straightforward storytelling of each track of “Start Over” elevate this artist to modern-day folk-hero status. His grasp of several musical genres makes him as accessible at a coffee house as at Bill’s Blues Bar during open-mike brunch. Fans of former Men at Work frontman Colin Hay’s solo efforts should particularly appreciate Jay Einhorn’s ‘Start Over.’ Though stylistically similar, the two artists differ in that Hay prefers simple lyrics, while Einhorn delves into the complicated poetry of a man who has spent a lifetime searching for the answers, and is finally ready to speak.”

Original cover art was created by Chicago artist Sandra Clay to Jay’s description of playing in front of the city of Chicago. 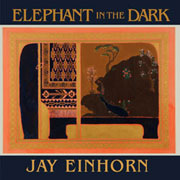 With “Elephant in the Dark” (2011), Jay’s artistic and production skills reach another level. The songs reach out and touch people; as was evident when Jay performed for groups with interests in psychology, religion and spirituality. Working with recording engineer/production assistant/harmony singer Dave Budrys, Jay began “Elephant” in 2007, working around his day job as a clinical psychologist. Every track features a full band, including the outstanding rhythm section of Doug Lofstrom on bass and Alpha Stewart, Jr. on drums and percussion, plus harmony singers, including singer-songwriter daughter Emily—featured on “Doin What She’s Doin,” together with Rob Sulski’s harmonica - and the outstanding vocalists Lisa Yusk Bowker, who also sings lead on “Journey,” and Matt Bowker. Most tracks feature the outstanding fiddler Jordi Kleiner. Keyboardist Aaron Ackerson contributes organ (“Battlefields of Eden” and “Regenerate”) and piano (“Beauty”). Track times are radio-friendly (unlike the longer track times on “Start Over”). Jay commissioned the painting of The Elephant in the Dark for his office, from the outstanding artist Francisco Centofanti, and it became the cover art. So Jay had lots of outstanding help in bringing his third CD to your ear and eye.